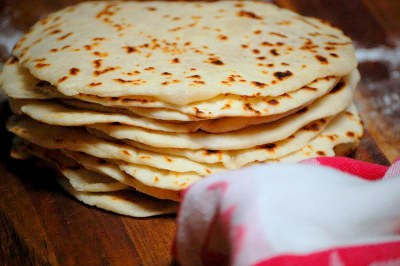 How much do you pay for a packet of ordinary tortillas? Not the specialty ones made of real maize masa flour, not the wholemeal ones – just ordinary bog-standard and, dare I say it, tasteless tortillas?

The stack in this photo was eaten over the next two hours by three people. Now, I would tell you that they are perfectly sane people with ordinary appetites but to see them hoeing into these tortillas and rolling their eyes in appreciation was a revelation. Not only were they easy to make, ridiculously easy in fact, but they were so intensely good. They were soft, pliable and light. They didn’t taste of uncooked flour. They didn’t taste of cardboard. They were incredibly moreish.

To make tortillas, you will need to head into your supermarket and buy some lard, which you will find next to copha and beef dripping and solid vegetable shortening. I’m not going to sugar-coat it, lard sounds like the worst product in the world to work with. It is rendered and solidified pig fat and there’s nothing in its appearance that endears itself.

However, the fact is lard makes the lightest of pastries and flatbreads imaginable. It adds the flakiness to flaky pastry and it imparts a slight unami flavour to the pastry, as you would expect from something so closely allied to bacon. It is invaluable in any pastry where you want crunch and lightness at the same time. I use it in hot water pastry for pork pies, in flaky pastry for pasties, in shortcrust pastry to cover a meat pie, even in chinese style dumpling pastry.

And in Mexico, it’s used extensively in tortillas. If you don’t like lard – and let’s face it, you wouldn’t be on your own – simply substitute it for butter. It won’t give the same textural lightness, but it will give you a far better result than anything you can buy and for a far cheaper cost.

I used ordinary plain flour, however for a more traditional result or if you want a gluten-free option, source masa flour, which is imported stoneground maize flour. One smell of it will remind you of every taco you’ve ever eaten. It’s not cheap – a local specialist deli sells it for $12 a kilo – but for an authentic or gluten-free option it’s unbeatable.

Makes 12 tortillas, about 18cm in diameter