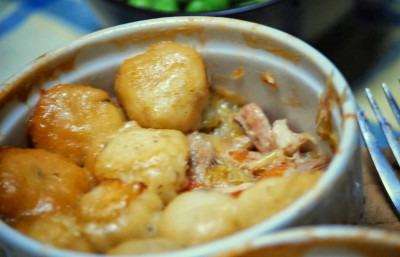 There’s nothing more welcoming, more comforting on a winter’s night than a hug from a loved one and in its absence that hug takes no better form than as a chicken pie. Often it’s even better than a hug. Oh, who am I kidding? Nothing is better than a hug, but still, this does warm you up from the inside out so it’s almost as good. Almost.

A chicken pie with potato dumplings seems a bit excessive, but these chilly mid-winter months are your one window of opportunity to feast on such hearty food. Why not?

If you don’t want to make individual pies you can easily make a terrific stew by popping potato dumplings into the chicken braise and letting it all cook off on the stove but I promise you this is even more than the sum of its parts the moment you place it in the oven. It’s sensational, needing nothing more than some green peas on the side.

If you want to make pies: Spoon the mixture evenly between four large ramekins. Place an even layer of dumplings over the top and cover each ramekin with foil. Place on a baking tray and bake in a 180°C oven for 45 minutes. Allow them to cool a little before eating, as they will be blisteringly hot.

If you want to make a stew: Place the dumplings in an even layer across the stew and push them down into the liquid. Simmer the casserole very gently for 30 minutes until the dumplings are soft. Spoon into bowls and serve.